“There can be no doubt that, in Brazilian art-music composition of the latter part of the twentieth century, Gilberto Mendes stands as one of the most creative individuals. As one of the members of the famous Música Nova Group of São Paulo whose artistic manifesto appeared in 1963, Mendes was a major spokesman of the Group. While the orientation of the group revolved around a total compromise with the philosophies and techniques of the avant-garde of the 1960s, Mendes’ own experimentalism took various forms. His works of the 1960s and 1970s, predominantly for voices and various types of instrumental media (including the symphony orchestra), reveal a remarkably original composer. Besides his well-known works set to texts by Brazilian concrete poets, Mendes was influenced by developments in the visual arts of the 1960s, such as the pop art of Robert Rauschenberg, Roy Lichtenstein and Claes Oldenburg, the films of Jean-Luc Godard and conceptual art. This explains his stimulation in exploring visual aspects in a number of mixed-media works where one finds a clear affinity with the indeterminacy and the music-theatre of John Cage. This influence results in several works calling for theatrical action and even in the very title of his autobiography: Uma odisséia musical: dos mares do sul à elegância pop/art déco (“A Musical Odyssey: From the Southern Seas to the Pop/Art Deco Elegance”)(1994).

Heretofore the piano works of Gilberto Mendes have received scant attention. For this reason alone, Márcio Bezerra’s study is most welcomed. But, the deeper motive for greeting its publication is the obvious seriousness of the research involved and the rather imaginative focus on Mendes’ music through the study of selected piano pieces. Indeed, the composer always considered the piano as his instrument and Bezerra’s representative selection of these pieces (ranging from the Prelúdio n° 1 of 1945 to the estudo ex-tudo eis tudo pois of 1997) reveals convincingly the three major phases of Mendes’ artistic trajectory. Characterizing each of these periods (1. Formative Years; 2. Experimental Period; 3. Mature Years) through broad stylistic traits, the author undertakes detailed contextual analyses of such traits in the specific selected piano pieces, clearly illustrating the com- poser’s overall development. Bezerra identifies Mendes’ most typical compositional technical devices as the pervasive use of musical quotation and extensive repetition and, in the first phase, the occasional reliance on Brazilian folk and popular music idioms. In his autobiography Mendes actually attributes to Villa-Lobos’ legacy his own connection to popular music when he states: «I believe I have the (same) relationship with popular music that Villa-Lobos had, that manner of his of suddenly making music explicitly popular, without loosing its general erudite character».

Bezerra’s study represents overall an excellent contribution toward the understand- ing of the “unique” eclecticism of Gilberto Mendes within the Brazilian contemporary compositional scene. The author thus provides good explanations of the independent music aesthetics of the composer who remains one of the true Brazilian pioneers in the field of serial, concrete, microtonal music, experimentation with new sound elements, new musical notation, mixed media, and theatrical gestures as musical components. Concurrently Mendes represents a real Brazilian artist in his unabashed risk-taking, modesty, sense of humor, and special joie de vivre. The Brazilian Academy of Music recognized him (at last) in July 2001 by making him Honorary Member of that august organization.” — Gerard Béhague

This work is available as
Hard Copy at: 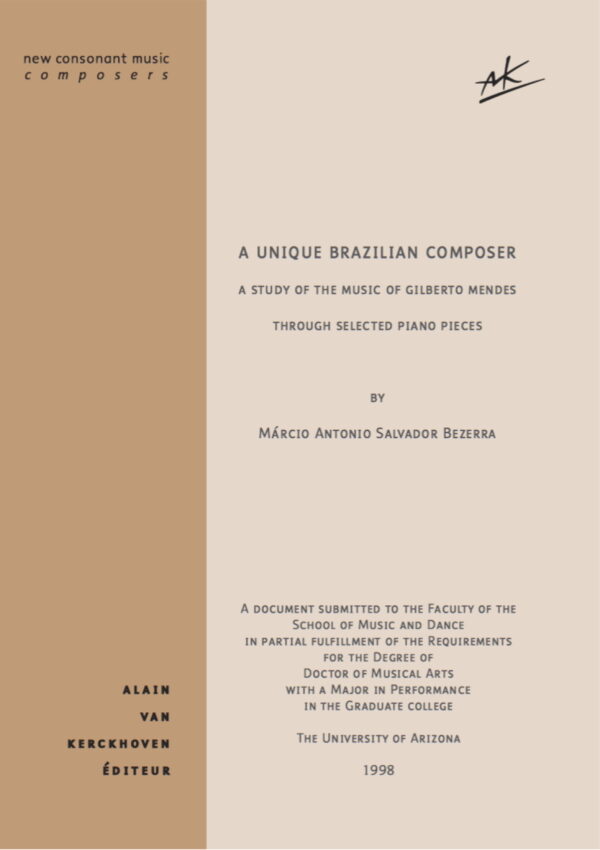 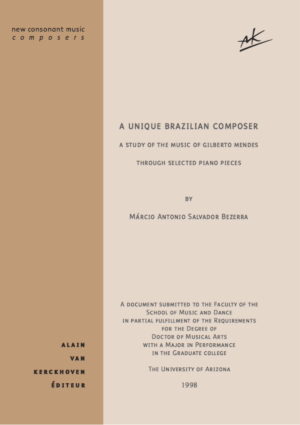