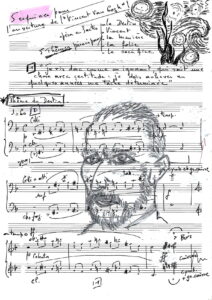 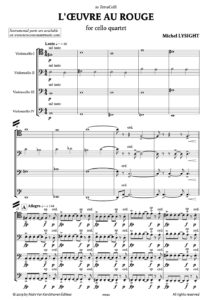 L’Œuvre au Rouge (2019) was commissioned by the TetraCelli Quartet who recorded it on CD in 2020 and is the dedicatee. It 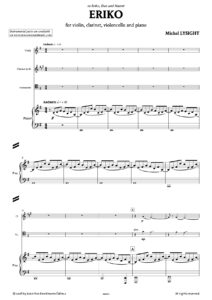 Eriko (2018) was commissioned by Phoïbos, a Brussels association that promotes Arts and Letters and awards the Louis Musin Prize to a 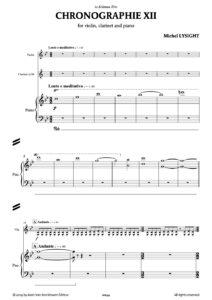 Chronographie XII (2019) belongs to a series of independent pieces, all based on a minimum unifying material of 5 notes (C, E,

Contemporary music! Some time ago, after a long period of obscurity, some composers decided to rebound with the old concept of pleasure.

This was not easy : since the Second World War, composers were attracted by intellectual compositional processes. Dodecaphonism and serial music expressed a rage to build systems based on logic. The audience didn’t follow and contemporary music concerts became ghettos for a nomenklatura of commissioned composers. Classical music is a language, and any langage grows with evolution while it is killed with revolution.

For the new consonant composers, the problem of the kind of language is not a problem. Their music can be tonal, atonal, microtonal… who cares? The point is that their music is understood by both performers and audience. So, New Consonant Music is nothing but the resurgence of an old and simple idea : if you have something to say, just say it!

Who are these composers? The pioneers are Henryk Mikolaj Gorecki, Steve Reich, Michael Nyman, John Adams or Phil Glass. But we want to make you discover many others like Frédéric Devreese, Dominique Dupraz, Piotr Lachert, Michel Lysight, Gilberto Mendes or Georgs Pelecis among many others.

Music should humbly try to give pleasure. Extreme complication is the opposite of art. Beauty should be sensitive; it should give us immediate enjoyment, it should force or wheedle its way into our minds without our having to make any effort to apprehend it. — Claude Debussy