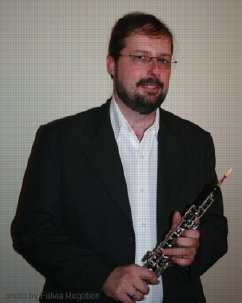 Bruno Abrantes Basseto was born in 1971 in the city of São Paulo, Brazil.

He studied the piano and the organ with Reynaldo Martinelli Filho, showing an early talent for improvisation. He fell in love with the sound of the oboe the very first time heard and he studied the instrument with Éder Levy Marques and Lúcius Mota.

Working as a researcher at the University of São Paulo, he developed a masters on the representation of musical knowledge by way of grammars, under the orientation of the professor João José Neto in 1999, creating systems for algorithmic composition and analysis and adventuring into the computer music domain with the help of Ruggero Ruschioni and Wilson Sukorsky.

A promoter of new music, he is the founder and director of the Euphonia Project, dedicated to the performance of modern and contemporary repertoire. As a teacher, he gave lessons in Music Theory, Acoustics and History of Art of the 20th Century, being the author of several methods and educational softwares.

Parallel to his fascination for the music of the 20th century, his love for the musical gesture and his personal conviction of the existence of a true musical language had led him to abandon avant-garde music and to devote himself to the production for traditional vocal and instrumental groups, focusing on the communicative aspects of music and the value of the performance and the performer.

His music may be described as deeply evocative and having beautiful and extense melodic lines, with great care for polyphonic structures. Full of extra-musical meanings, his music makes use of any available compositional technique, with notorious influence from Brazilian folk and popular music and jazz. 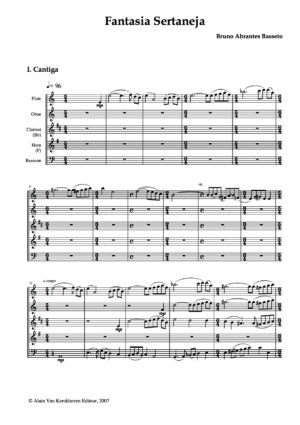